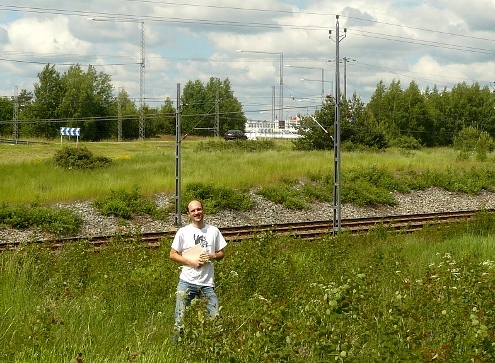 Today I celebrate 20 years as a professional archaeologist!

In the spring of 1992 I turned 20, completed my BA, got married and moved out of student accommodation. I was very lucky: I had immediately upon graduation gotten a four-month job on a contract dig for the Arlanda airport bullet train, conducted by the National Heritage Board’s Stockholm unit and headed by Marja Mutikainen. To some extent I got the job because I had some professional experience with computers and magazine writing, but more importantly I got it because I had made a friend among the contract archaeologists at a dig where I had trained the preceding autumn. I called her and asked her to find my application in the stack. And so, on Monday 15 June, I started work.

The site was at Åshusby in Norrsunda parish, Uppland province (Raä 185 and others). It’s next to the Märsta & Sigtuna off-ramp from the E4 motorway heading north, on the flat ground between the road and the glacial ridge. It had already been stripped when I came there, one big sandy playa dotted with dark-fill sunken features. I spent that summer endlessly sectioning those features, section-drawing them and sieving their fills. Most couldn’t be interpreted at all. But there were post holes too, some forming Early Iron Age house foundations, and hearths, and collapsed drystone field walls, and the remains of a triangular stone pavement that covered a cremation grave containing a simple bronze armlet. Still, small finds were extremely few. Nobody metal-detected before stripping in those days (few still do), settlements of the period are notoriously short on finds, and the sandy subsoil meant very poor preservation conditions.

This was the unit’s first season not only with me, but also with EDM total stations. This surveying instrument improved the speed and accuracy of planning immensely. But we didn’t quite know how to use it in the best way. We had been told that we had to put the machine on one of our three fixed points (bolts in rock outcrops, with known XYZ coordinates), when afterwards I learned that we could in fact have put the machine anywhere, taken measurements with it of where the fixed points were, and then it would have known where it was. Another aspect was the software we were using. The field computer we used to collect the data from the EDM was a Psion Organiser with a dinky screen. And we kept our measurement data not in CAD files, but in a huge dBase III database, where every coordinate point had an ID number. Every time we wanted to look at new measurements, we had to run a conversion utility on the database that converted it into a CAD file. (This utility was the embryo of the successful Intrasis software package.) And we used a pen plotter to make hard copy. My first archaeological publication, in a little-known Danish newsletter on digital methodology, is about what I learned there.

I went back today and checked the site out. Deep railway cut through the excavated area, fast trains shooting past, vegetation regenerated, hardly any traces of our trench edges to be seen. But I found collapsed stone wall Raä 105 in good shape, including stretches of it that were in our trench I think. And I found the trench edges around house foundation I in the south-east where we extended to get all of the house. And I found the surveying bolt in the outcrop across the off-ramp.

I was proud back in the day when I managed to impress the team by solving the problem of how to change parts of stuff we had measured earlier but needed to update. Long after surveying the main trench’s edges, we extended it at the northern end. I figured out the ID numbers of the old data points on the trench edge we had moved, went out and measured the same number of coordinate points for the new trench edge, and replaced the coordinates of the moved section by hand in the database.

The report appeared six years after the dig.* I’m not quite happy with the dating conclusions drawn (Dunér & Mutikainen date the settlement’s life to a span from the Iron Age’s period III to V when the earliest datable find is from period IV and the radiocarbon dates cluster neatly in periods V and VI), but it sets out the evidence we gathered well and places appropriate emphasis on the well-preserved house foundations and their interrelationships within the two farmyards we uncovered.

And so here I am now, twenty years down the road. I wrote the dissertation I was planning already when I dug at Åshusby, and a lot of other things, and I dug some pretty cool sites, and handled a lot of finds, and went to a lot of conferences, and got a lot of appreciation for my activities. Archaeology has fed and entertained me quite well, and I think 20-y-o me would approve of my CV. Academia hasn’t rolled out the red carpet for me in the manner I had hoped, but that’s mainly because I have slight delusions of grandeur – and because I’ve tried to brute-force the system on my own terms instead of relying on vassal relationships with professors. The one feudal lord I did swear fealty to made me editor of my field’s main research journal, so that wasn’t so bad.

8 thoughts on “20 Years Working In Archaeology”