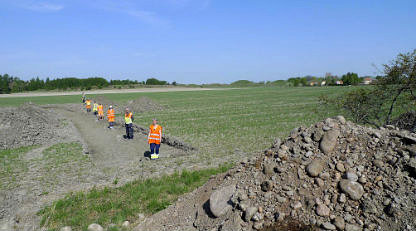 Major excavations are taking place in Old Uppsala because of railway work. Old Uppsala was a political, religious and mercantile centre from about AD 600 to 1274. In fact it may be termed the central place of the Swedes – tribe and kingdom – during those centuries.

My friend, author Kristina Ekero Eriksson, is the fieldwork’s outreach officer and keeps a blog. So far there hasn’t been much to report beyond what you might expect on a contract excavation in the region, but now some interesting stuff is popping up. How about some long lines of regularly spaced stone-filled pits? They’re in the big field south of the Royal Barrows, and they look like they once held standing stones like the ones along the ancient road at the Anundshög barrow in the neighbouring province. Huge Late Iron Age barrows and roads lined with standing stones… Now all we need are the foundations of some good stone ships at Old Uppsala to complete the picture of a Viking Period royal centre!

And where are the standing stones now? They were long gone by the 17th century. Well, soon after Christianisation a cathedral was built in Old Uppsala, most of which was then torn down and, unless I’m mistaken, sent downstream on rafts to build the current Uppsala cathedral.