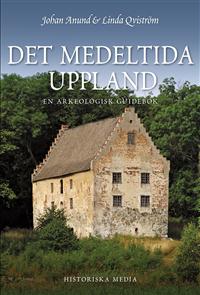 Sweden’s traditionally divided into 25 landskap provinces. They live on in people’s minds despite having been superseded by a new län division in 1634. The boundaries of the landskap go way back into prehistory, and so they don’t respect the country’s cities much, these generally being much later in origin.

Stockholm is a case in point. Today’s urban area is neatly bisected by the boundary between Uppland and Södermanland provinces. Two years ago myself and other Stockholmers got half of our High Medieval itches scratched by a fine archaeological guide book covering Södermanland. Now Johan Anund and Linda Qviström have returned with a book that sees to our Uppland needs as well.

Det medeltida Uppland is just as jam-packed with goodies as the previous book, full of interesting information and lovely pictures. As I wished for in 2010, the new book has GPS coordinates. But it still does not have a table of contents that covers subheadings, nor individual page headers. These things might be worth thinking about for the volume on the Medieval city of Stockholm that is also forthcoming. (I have written on that subject here before upon reading Nils Ahnlund.)

Here are some tidbits that caught my interest especially.

I do find, however, that the copy editing and proof reading is sub-par. One thing that grates particularly on my sensibilities is the many comma splices where independent clauses are breathlessly stacked on top of each other with commas between them, not conjunctions or periods. On p. 170, for instance, we find this monster (and I translate):

The purpose of the church porches is controversial, they probably acted both as chapels and assembly halls, sometimes ecclesiastical courts may have convened there.

All in all, though, the book is a fine addition to the popular literature on the Scandy Middle Ages for people who like to visit sites, not just read about wars and royalty.