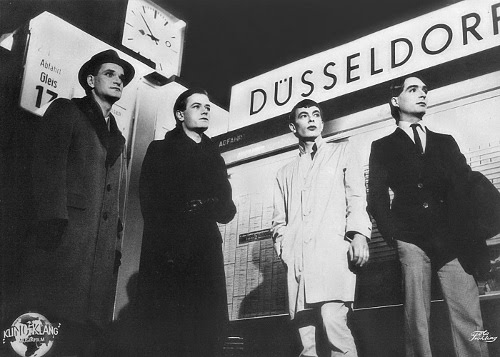 I used to be kind of angry and disappointed with Kraftwerk. The only album they put out after I started listening to them was 1986’s Electric Café which is OK but not great, and after that, no new material. But now I look at their catalogue and think, hey, from 1974 and for seven years on, they released five amazing albums. The stellar Computer World appeared in 1981, the year when Hütter & Schneider turned 35 and 34. In terms of the normal productivity and creativity arc of a band, Kraftwerk have nothing to be ashamed of. And there is that nagging question of what Ralf Hütter’s 1983 cycling accident did to his head.

I guess as a kid I had no good idea of time. My friend introduced me to this amazing band in the early 80s and I just assumed that “this is happening now” — when in fact I was listening to some of the most innovative music of the preceding decade.

16 thoughts on “Making Peace With Kraftwerk”