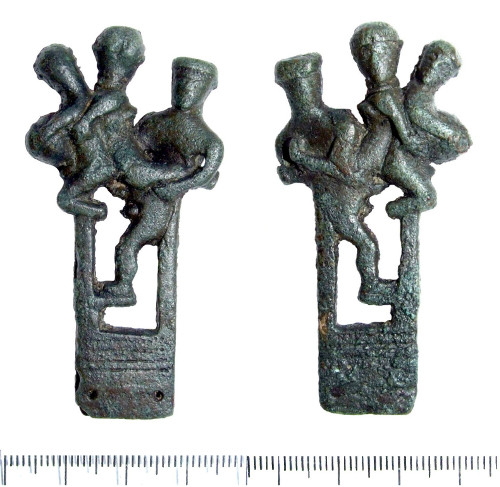 At first glance, frankly, it just looks like a threesome. Once you’ve untangled the participants though, you find a man and a woman back to back (as on Yvonne Gilbert’s sleeve image for Frankie Goes To Hollywood’s 1983 single ”Relax”), emphatically not getting it on together for anatomical reasons, and both in an attitude of passive dejection. The third figure is more actively posed, phallic, and seems to be depicted at the moment of choosing whether to bone the woman or bugger the man, both of whom are conveniently placed for penetration. Active Man is wearing only a low cylindrical cap. Woman is wearing a neck ring and possibly a belt. Passive Man, nude, is cradling a severed head. What does this all mean?!

Collins offers an ethno-political explanation for the composition that strikes me as quite convincing. Who, in Roman Britain, wears neck rings and takes heads as trophies? Unpacified, non-Romanised, tribal, Celtic-speaking Britons do. Who, in the Roman art of the period, wears cylindrical caps? Soldiers and emperors do. So in Collins’s reading, this is not simply pornography: it’s a comment on the Roman Conquest, when the Britons got screwed over (figuratively and in all likelihood literally) by the Roman legions. Neat!

3 thoughts on “Getting Screwed Over By The Romans”