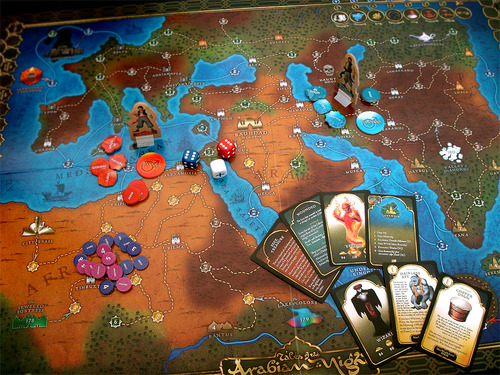 Most story boardgames don’t let you do much tactically to influence the results or win. I’ve reported previously on what a game of Arkham Horror (2005) can be like. And I’ve played Betrayal At House On The Hill (2004) quite a lot. But the storiest of all story boardgames I’ve played is Tales Of The Arabian Nights (2009). Me and my friend Roland played it Sunday, which took us 22 rounds and about 4.5 hours.

Roland was Ali Baba and finally managed to win, which was no mean feat given that it’s hard to get the damn game to end at all. You need 20 points to win. But we had 40 points each at the end, because each of us had gotten stuck with annoying disability cards which said plainly that you couldn’t win while having them and were really hard to get rid of.

Ali Baba’s story would have been well worth chronicling, particularly the bits where he kept trying to get home to his wife in Sri Lanka and almost got there but drifted away or got teleported – to Ireland, twice! But I played Aladdin, and here’s his story. My favourite bit is the one with the barber.

A poor young man named Aladdin travelled from Baghdad to Shiraz in southern Persia. There he hired someone’s slave as a bodyguard for a visit to his mistress. Sadly the woman really disliked the slave’s looks, so she refused to let Aladdin in and instead cursed him. Aladdin decided to forget about her and head for China. In the Central Asian mountains he came upon a mystical fire but escaped harm by means of prayer. The experience toughened him up. Then our hero ran into some cheerful brigands. He attacked them and was badly hurt by a spear.

Though wounded, Aladdin soon reached the great Chinese city of Suzhou and found a secret temple frequented by evil fire-worshipping Magi. He tried to blend in among the congregation to steal valuables, but was unmasked. Only the intervention of a friend saved the young man, who ended up with a consuming envy of rich people.

Aladdin rode a boat south along the coast and went ashore in a mountainous region. There he happened upon another one of those secret evil fire temples. This time he prudently reported his discovery to the Sultan. The wise and powerful ruler of the Muslim world somehow had this Chinese temple torn down, but forgot to reward Aladdin. The young man’s covetousness grew even worse. He headed for the city of Gaya in eastern India.

In Gaya Aladdin tried to help an insomniac wizard. When he failed, the wizard had him dragged behind a horse until near death. After this harrowing experience, Aladdin decided to make a pilgrimage to Mecca. But first he debunked a snake-oil salesman. The bystanders were so impressed by Aladdin’s learning that one young woman offered to marry him. He refused and instead went south to Tana. Here a chained Ifrit asked him for help. Aladdin refused and was tricked into drinking magical water. Suddenly he was a woman!

The confused young (wounded, mangled, covetous) woman went to Muscat in Arabia where she was beaten and crippled by a Jinn. Continuing on up the Persian Gulf to Basra, she made the acquaintance of an extremely talkative barber who began pursuing her relentlessly in order to bore her further with his endless blabbering. Fleeing the barber to Mecca, she completed her pilgrimage and managed to hide from her pursuer. She was now a Hajjah. However, the barber was so angry with her that he spread evil rumours of her all around Mecca and she became publicly disgraced.

Having shaken the barber off her trail, Hajjah Aladdina went to eastern Turkey and helped a beautiful enchantress get rid of an annoying former lover. She simply pointed out the risk the man was running of getting turned into a toad. This little victory was enough to turn Aladdina into a respected magician and master storyteller. She immediately decided to go on another pilgrimage, this time by way of Hamadan in northern Persia. Here she carelessly asked a madman for directions and got completely lost. Before finding her way again she was chewed upon by an unspecified beast.

Back in Mecca, Aladdina witnessed a house fire. Drinking from a water bucket, the crippled young woman became violently ill. But she completed her second Hajj. Travelling through the desert in this state, she came upon a mystical river where she took a boat ride and caught four magical fishes. Pleased with her catch she rested to regain her strength.

Arriving in Damascus, Aladdina was hypnotised and robbed by a magician. Ali Baba came travelling through town, and Aladdina made sure he too caught the illness she had contracted in Mecca. She then went back into the desert again where she safely performed meteorological studies of a great storm. Ali Baba came along and paid her to treat his illness. Nobody could explain why Aladdina couldn’t administer the same effective treatment to herself.

Our heroine now went by sea to Rome where for some reason she beat up a disabled man she had never seen before, calling him a “wicked hunchback”. This behaviour suggests that she may have been losing her grip on reality. Indeed, from this point on her tale begins to become strange even by Arabian Nights standards.

It seems that Aladdina travelled to Adrianople in western Turkey. Here she assisted a beautiful sorceress in a magical ritual, which failed. Aladdina then visited a magnetic mountain, where a ghost treated her to an evening of drinking and conversation before whisking her away to a haunted house – in southwest Khazakstan (!). Here an Ifrit showered her in gold, she told stories to it, and she believed that she had somehow been made Sultan.

“Sultan” Aladdina travelled south to Daybul in Pakistan. Here, despite being fabulously rich, she robbed a princess and received yet another curse. Our erratic heroine then went by boat to Zeila in Somalia where she avoided dealing with a chained Ifrit but instead ran into a vizier who was being chased by a mob. He hastily put his clothes on the unresisting madwoman and ran away, leaving her to get beaten by his pursuers. And at this point news came from Baghdad about Ali Baba winning the game.

One thought on “A Tangled Tale Of The Arabian Nights”