A restaurant review by Aard regular John Massey. Macau is an old Portuguese colony on the southern coast of China.

Albergue has numerous translations, which include “hostel” and “refuge”. “Refuge” is now a suitable translation for Albergue 1601, hidden within the quiet and peaceful historic St Lazarus Quarter with its mostly pedestrian-only thoroughfares, away from the hectic, modern, polluted awfulness and tawdry, glitzy casinos of much of modern Macao. But it is more likely to have carried the original meaning of “hostel”.

It must be accessed on foot up the sloping, decoratively cobbled, pedestrian-only Calcada da Igreja de S. Lazaro. The temptation to follow interesting-looking side diversions along narrow streets in this area is hard to resist, but luncheon beckons. Albergue 1601 is a small establishment, and advance reservations are strongly recommended. Exploring the area would be better done afterwards to walk off the excesses of lunch, when getting hopelessly lost is more in the category of fun than minor disaster, provided you remembered to visit the lavatorio before leaving the restaurant.

Albergue 1601 is not confined to one building. In various capacities it occupies one- and two-storey, well preserved heritage buildings on three sides of a small plaza, which is now dominated by two very large camphor trees which dwarf the buildings. The entrance gateway to the plaza occupies the fourth side.

You can be forgiven for missing the entrance gateway. The legend across the top of the gateway reads SANTA CASA DA MISERICÓRDIA ALBERGUE, but this is now rendered illegible by encroaching vegetation, which no one seems to be in a hurry to remove. The small but conspicuous billboard planted beside the roadway gave the location away, though, or we would probably have walked straight past it. 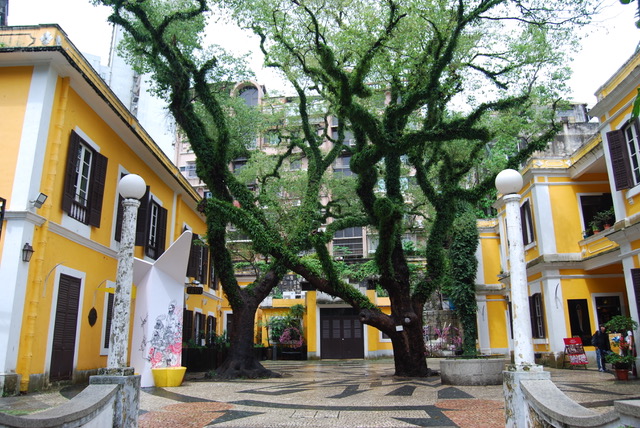 Once inside the gateway, we had the difficult task of identifying the entrance to the restaurant. It wasn’t easy, being virtually invisible and with nothing to advertise its presence. You might suspect they are trying to keep it a secret, and maybe they are. I certainly hope so – this is the sort of place you want to keep to yourself, for fear of it being overrun by bloated, over-zealous, Instagramming gluttons.

It turned out to be this nondescript little doorway:

Once inside we were invited to sit on welcoming giant leather sofas that are so worn that they appear to have provided a welcome resting place for the backsides of foot-weary travellers for hundreds of years, and probably have, while the staff located our reservation and then beckoned us up a very narrow and rather creaky old wooden staircase to our table, with a pleasant view overlooking the small plaza. We had the small room to ourselves, the seating was very comfortable, the table well and tastefully appointed, with an array of salt and pepper grinders, some particularly fine olive oil and a bottle of vinegar. Service was efficient, pleasant, polite, knowledgeable, quick without rushing and unobtrusive, just the way it should be but frequently is not. As soon as it was clear that we had finished with one course, the next course arrived promptly.

The menu is extensive to the point of confusion and indecision, but we worked our way through it, while our server delivered excellent bread piping hot and accompanied by small dishes of delicious black olive paste with which the sharpen the appetite, if it needed any sharpening. My wife and daughter studiously ignored my advice to choose one of several bacalhau (dried and salted cod) dishes for which Macao is renowned.

There is no need to fear language difficulty with the menu – we were presented with the English version of menus without needing to ask. For starters, I chose the gambas à guilho (garlic shrimps), while the girls ordered salada de polvo (octopus salad) and petingas fritas (baby sardines). Mine turned out to be five very well-sized prawns, shelled (so no messy fingers required) and smothered in an addictively delicious sauce that was adequately but not overwhelmingly garlicky. Having demolished the four prawns left to me after the girls had speared one to share between them, I could not stop myself from scooping up that delicious sauce and eating it spread on bread. I am not a big eater, and that one dish alone plus bread would have sufficed for my lunch. The girls reported that the octopus salad was bland and indifferent – certainly edible but not exciting, but they did very much like the sardines.

For mains, the girls chose the arroz de marisco (seafood risotto) and the secretos grelhados (grilled Iberico pork shoulder). I superfluously ordered the vegetais salteados (garlic mixed vegetables), not realising it was not a side dish. The seafood risotto was easily enough for two, and the girls went about demolishing it very happily and pronounced it to be superb. When cooked with sufficient liquid, the Portuguese strain of rice becomes creamy, and it came chock full of crustacea, shellfish and pieces of fish. My dish of garlic mixed vegetables was embarrassingly very large – the vegetables were delicious and excellent in variety, but I could hardly make a dent in them. The pork shoulder was very tasty but a bit on the chewy side; it came with good parsley mashed potatoes.

We had ordered far too much food for lunch for three, but no matter – the staff obligingly put the pork shoulder, mashed potatoes and garlic vegetables into leakproof plastic boxes for us to carry back to Hong Kong to have for dinner when we got home, too tired to cook, which we duly did.

For dessert, out of curiosity I not could resist ordering the serradura (sawdust icecream pudding), and the girls decided to share a pêra bêbeda (drunken pear poached in port wine). My serradura came as a nicely decorated and suitably modest serving (rather than the diabetes-inducing monstrosity you would be likely to get in the USA or Australia), so once the girls had each stolen their sample spoonful to try, I had no difficulty at all finishing the rest. It was delicately flavoured and excellent. My wife declared the dark purple Poached Pear to be VERY ALCOHOLIC!!! (well, the name did sort of warn her it might be), but I noticed that between the two of them, the girls had no difficulty in consuming all of it, and not too much difficulty walking afterwards.

I rounded out my excellent lunch with what was, without question, the best cup of coffee I have ever had in Macao, which means one of the best cups of coffee I have ever had anywhere. Macao puts Hong Kong to shame when it comes to coffee. Daughter stole a sip and agreed with my assessment, and she knows a thing or two about coffee. She and Wife had tea, which they confirmed was indeed nice tea, but unexceptional.

In all (remembering that we drank only a bottle of mineral water with lunch, not wine), the bill came to MOP$ 1130 (USD 140, €124, SEK 1290; the Macao pataca is pegged to the HK$ at the rate of HK$1 to MOP$1.03) – not cheap, but not overly pricey either, and after all this is definitely a “high end” restaurant. And we had ordered enough food for two meals for three people.

After lunch, my curiosity drew me to the other side of the small plaza, where I discovered the Albergue 1601 gift shop, a beautifully appointed small shop selling various canned Portuguese comestibles, special soaps made in Portugal, myriad bottles of mysterious substances for ladies to put on themselves and a confusing array of other things that I couldn’t very well take in – besides, we were travelling very light, so I wasn’t up for buying anything, although I wouldn’t have minded. Next door was a gallery, which was under renovation when we were there – I poked my head in far enough to see that it was a sizeable, uncluttered and very pleasant, well lit space, which I presume is for local artists to display their paintings and sculpture, before one of the tradesmen doing the renovating invited me to remove myself again in a not overly polite manner. Fair enough.

We did all remember to visit the lavatorio before leaving, me struggling to lock and unlock the antique wooden door with its clunky wooden latch, which presented no such problems to my wife and daughter – and I’m the one who is supposed to be an engineer! Even the lavatorio was a pleasant enough experience, though – spotlessly clean and fragrant.

So then, there was nothing else for us to do but head off down the hill, wishing we had time to go poking down all of the fascinating looking side streets, and looking for somewhere we could catch a taxi to take us to the Outer Harbour in time to catch the TurboJet back to Hong Kong, a trip that takes almost exactly one hour pier to pier.

Would I go back to Albergue 1601 again? Yes, in a minute. I give it top marks for food, presentation, service, ambience, physical setting, and anything else a restaurant can get marks for. I am enthusiastic enough about it that I would post something on their Facebook page to praise the place, but I’m kind of trying to keep it a secret. I doubt I will succeed.

Which reminds me – their Facebook page contains their menu:

3 thoughts on “John Massey Eats At Albergue 1601 in Macau”