Roger Wikell (1965-2019) was particularly interested in three fields of research. Here is one paper for each field, all from Fornvännen because most of Roger’s Open Access work is found there. All are in Swedish with abstract and summary in English. Plus an obit written by Roger.

And below are some blog entries of mine reporting on Roger’s and Mattias’s et al. work. Apologies for the missing pictures: they were lost in a blog migration.

Cemeteries of the period 1000-300 cal BC around Lake Mälaren display a bewildering variety of ugly, damaged, diffuse stone structures. They usually contain multiple small depositions of potsherds and burnt bones that often do not represent a whole person, and sometimes there’s even just part of an animal. Closed finds are frustratingly rare here, when archaeologists often look to cemeteries to find out about chronology and social roles.

I’ve been reading Anna Röst’s 2016 PhD thesis where she’s drilled down for hundreds of pages into the minutiae of two of these sites. She has a really interesting perspective on them.

Röst suggests that her sites were not governed by the idea of permanent burial that we see so often in eras before and after her study period — including our own. Instead, they were intended for long convoluted multistage ritual processes where people would mess around with the bones, metalwork, stone structures, pottery, fire and animals. The great variation among the structures that we excavate and document now is partly due to varying ideas about the correct script for such a chain of ritual events: two structures may look different today because they were never intended to look the same. But in other cases the variation may be due to a single ritual script being interrupted on different pages: two structures may look different today because they were abandoned at different points along the timeline of a single process.

This recalls Fleming Kaul’s interpretation of the imagery engraved on period bronze razors: he considers each razor to be a panel in the same comic book about sun-ship mythology. You can’t understand a whole comic from one panel. Nor can you understand what people where doing and intending at a Late Bronze Age cemetery in Södermanland by looking at a single structure.

But there’s a big difference between the burials and the razor iconography. We never find a razor with a half-drawn scene on it. If Röst is right, then almost every one of the structures we document today at her kind of cemetery is a half-drawn scene, intended for an audience who were interested in the act of drawing, not in reading the finished comic book.

The latest inland ice was 3 km thick and its weight left a big dent in Scandinavia. Since deglaciation (which is, on the geological time scale, a current event) the dent has been straightening out. This causes land uplift. But just outside the edge of the dent, it causes the land to sink. Southernmost Scandinavia is losing land to the sea, not gaining it.

The fulcrum of this see-saw crosses Lake Vättern right at its southernmost point. The lake is receding at one end and encroaching at the other. This is why there is an Early Bronze Age burial cairn (Raä 140:3) and sacrificial bog (Raä 140:4) on the lake bottom off the town of Huskvarna . The cairn was originally built about 1400 cal BC on a hilltop above the lakeshore, in a location where it would be widely visible from boats. It didn’t turn out that way.

Later the cairn was joined on the lake bottom by Sanda parish’s Medieval church.

I’ve written before about Huskvarna on the subject of the substance abuse epidemic that decimated two generations of the town’s industrial workers in the 20th century.

Update following day: my knowledgeable colleagues Staffan von Arbin and Claes Pettersson point out that only one cairn is actually known at present, not several as I implied in the original wording.

I’ve linked before to Christina Fredengren’s ground-breaking paper in Fornvännen 2015:3 about human and animal remains found in wet contexts in Uppland province (the area around Uppsala). The study’s empirical base is solid and eye-opening. I don’t find find the theoretical superstructure that the author briefly sketches onto it (the titular ”water politics”) convincing. But that’s not my main complaint about this otherwise excellent piece of research.

Look at the map above, covering a small part of the study area. Bear in mind that due to the relieved pressure of the inland ice, land rises and the shoreline recedes quickly here. The finds from the site and environs of the town of Uppsala map the current channel of River Fyris. Out in open water, during periods when the river mouth was hundreds or thousands of meters upstream of these find locations. Did people really go out in boats and sink remains of humans and animals exactly along a stretch of river that didn’t exist yet? No, they couldn’t do that. I believe there are two other main possible explanations for this distribution.

1. The reconstructed shorelines on the map are not coeval with the depositions’ radiocarbon values. Quaternary geologists have grossly misled Fredengren about the shoreline displacement’s timing. (Not likely in my opinion.)

2. The shorelines on the map are coeval with the deposited bones, but these have been flushed way, way downriver in recent centuries before getting picked up, and their find spots are thus not where they were originally deposited.

In either of these cases, Fredengren’s discussion of the Uppsala area becomes moot. The map does not show the true situation at the times she discusses. And the concentration of finds in urban Uppsala is an artefact of the town’s location.

Sweden’s bedrock has been entirely abraded by the inland ice. It sanded down the country like a big wood planer, leaving smooth lovely outcrops known as hällar all over the place. This is the main natural prerequisite of Sweden’s rich rock art tradition. Most of it dates from the Bronze Age, 1700–500 BC.

Denmark hardly has any visible bedrock, so they don’t have much rock art over there, and what they do have tends to be on boulders. It is thus hardly surprising that when you do find figurative art on boulders in Sweden, it tends to be in the provinces closest to Denmark.

Near Asige church in Halland we have one of the most monumental examples of this. Two flat stone grave markers and two pairs of big honking menhirs with rock art on them! One pair has become embellished with an antiquarian name: Hagbards galge, “Hagbard’s Scaffold”. This refers to a tale told by Saxo Grammaticus in his History of the Danes and is probably a coinage from about 1800: after us Scandies rediscovered Medieval literature but before we realised that the world is considerably more than 6000 years old. There was a time when intellectuals thought that all Scandinavian antiquities could be explained with reference to the Sagas.

The legendary rock art surveyors Sven-Gunnar Broström and Kenneth Ihrestam have often figured here on the blog. Now they have reexamined and documented Hagbard’s Scaffold, finding lots of previously unseen motifs. (But first the County Archaeologist had someone kill and remove all the lichen on the stones.) This transforms the monument from a group of menhirs with some rock art on them into honest-to-goodness pictorial stelae! Though the mate of the birth-giver stele has only cupmarks and the mate of the shield-bearer stele has no markings at all. 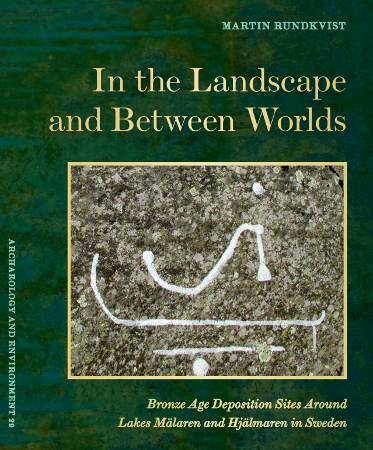 Dear Reader, it is with great pleasure that I announce the PDF publication of my fifth monograph,* In the Landscape and Between Worlds. The paper version will appear in April or May. Here’s the back-cover blurb.

Bronze Age settlements and burials in the Swedish provinces around Lakes Mälaren and Hjälmaren yield few bronze objects and fewer of the era’s fine stone battle axes. Instead, these things were found by people working on wetland reclamation and stream dredging for about a century up to the Second World War. Then the finds stopped because of changed agricultural practices.

The objects themselves have received much study. Not so with the sites where they were deposited. This book reports on a wide-ranging landscape-archaeological survey of Bronze Age deposition sites, with the aim to seek general rules in the placement of sites. How did a person choose the appropriate site to deposit a socketed axe in 800 BC?

The author has investigated known sites on foot and from his desk, using a wide range of archive materials, maps and shoreline displacement data that have only recently come on-line. Over 140 sites are identified closely enough to allow characterisation of their Bronze Age landscape contexts. Numerous recurring traits emerge, forming a basic predictive or heuristic model. Bronze Age deposition sites, the author argues, are a site category that could profitably be placed on contract archaeology’s agenda during infrastructure projects. Archaeology should seek these sites, not wait for others to report on finding them.

Get the PDF for free from Umeå University, Academia.edu or ScienceBlogs!

* Though I’ve written at least one book chapter, on 8th century brooches, that’s considerably longer than my third book.

I’ve finalised the cover of my upcoming book with designer Bitte Granlund!

Cover image: detail of a rock-art panel at Hemsta in Boglösa, Uppland. An axe with its characteristic s-shaped haft, an incomplete ship and two cupmarks. According to Johan Ling, the panel’s ship types and the level above the sea indicate a date in Per. II, about 1400 cal BC. The closest known Early Bronze Age deposition site is Hjältängarna at Grop-Norrby in Vårfrukyrka, about 14 km to the NNW. An axe was deposited there a century or two after the Hemsta carvings were made. Photograph by Sven-Gunnar Broström.

To my delight, the response to my plea has been strong. At the moment I believe I have enough volunteer proof readers.

Since late ’09 my main research project has concerned the Bronze Age in the four Swedish provinces surrounding Lakes Mälaren and Hjälmaren. I’ve looked at the landscape situation of the era’s deposition sites, which is pretty much where you find bronze objects. Yesterday I finished the first draft of the book (except the descriptive gazetteer, into which I still need to stick a few bits). And so here it is (300 kB PDF file)! The title is:

In the Landscape and Between Worlds. Bronze Age Deposition Sites Around Lakes Mälaren and Hjälmaren in Sweden.

I would be very grateful for comments, corrections and questions from Aard’s readers. Don’t be afraid to ask layman’s questions. There are no illustrations in the file because most of them haven’t been made yet, though they are on their way.

The last time I asked my readers to pimp a book manuscript was in June of 2010. Two dear regulars stepped up to the plate and were duly thanked in the preface to my Mead-halls book.