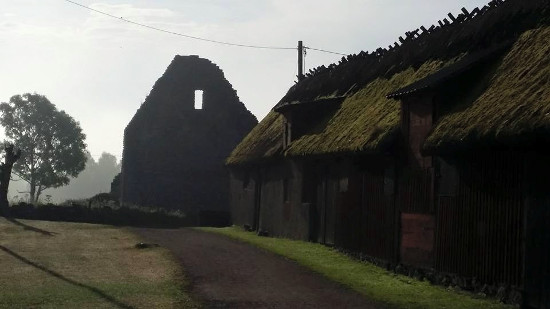 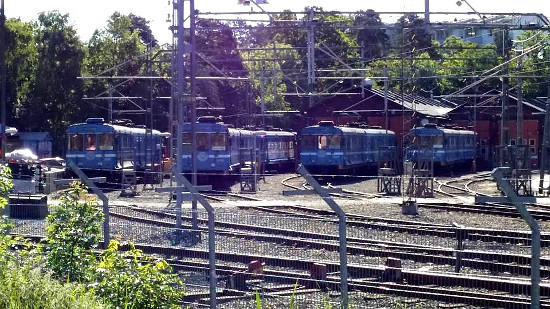 Three years ago when we moved into our house, the stones of our patio were newly laid and all level. Since then we have been walking across that surface, usually along the diagonal between the patio entrance + shed door and the front door of the house, sometimes around the corner to the compost container. Every step we’ve taken has caused a stone to settle infinitesimally into the substratum. Every step the kids have taken has on average made a slightly greater impact as they’ve grown. And when it rains, you can see that it all adds up. If I had a more volatile psychological constitution, this sight would probably be enough to trigger a full-blown mid-life crisis.

Here’s what’s currently outside my kitchen window. Rosehip in the foreground, rowan berries in the middle, and cloned white brick houses like my own in the background.

Earlier this summer I did some upkeep on the board fence, pergola and yard gate of my house. Swapped some rotten boards and beams, put on some paint, whacked a few nails back in that had crept out. Easy work since I didn’t have to design anything: I just measured the original parts and copied them with fresh material. And today I cycled to the builder’s store and brought a few short boards home to fix the door of the garden shed. The lower four boards were rotten. Pleasing work, not least because I noted the need myself and did the job in my own good time.

What about you, Dear Reader? Done any carpentry lately?

Boat Hill, where I live since two years back, is a 70s tract-housing estate where roofs are almost flat. Snow thus tends to build up on them. Of course, pile enough snow onto any structure and it will collapse. But I’ve come across a curious notion here. Several neighbours have told me to beware wet snow “because it’s so heavy”.

They’re not talking about snow that becomes secondarily soaked by rain that adds to its weight. They believe that if I have a tonne of powdery snow at -10 Celsius on my roof, I’m OK, but if that tonne approaches 0 Celsius and compacts down into a thinner, less fluffy layer, it will break my roof.

As far as I understand, they’re confusing weight and density. A shovel of powdery snow is lighter than a shovel of slush. But when you shovel slush, you need to shift fewer shovels of the stuff to get your yard (or roof) free of snow.

I once produced a small shell midden in my kitchen. Just now I made a small clearance cairn in the garden. My wife has ordered a peony bush from Gansu in China via a plant dealer in Turku, Finland, and I picked it up at a trucking firm the other day. Now it fell upon me to dig the hole and plant the thing. While digging I set aside all the stones I came upon, as lo-tech farmers have done for millennia, only at a smaller scale. And thus my little cairn.

Last summer I battled with wasps: this years it’s ants. Small black ones have underground nests in our yard, and they usually don’t bother us much. But a hot and dry summer recently inspired them to investigate our house, where they found two things they really like: sugar and water. When we returned from a trip to the archipelago, a busy ant highway stretched from the side door through a bedroom, a corridor, the dining room and into the kitchen, where the main destinations were our candy cupboard and the sink. Thousands of tiny insects.

I bought some insecticide. It looks like pale pink ice-cream sprinkles, and in fact consists mainly of sugar. But mixed into the sugar are two chemicals: one that makes the stuff taste awful to children and other large animals, and another that kills insects. It’s imidakloprid, a synthetic nicotine analog. I put a pinch of the stuff in each nest opening I could find out in the yard, and placed a small dish of it by the ants’ entry-point into our house.

It was frighteningly effective. After a couple of hours, that busy ant highway across our floor was gone. Our yard was also deserted. All that remained were a few dead ants. Apparently, most of them ran home when they started to feel sick. And none of them were of course smart enough to avoid the bait: they’d climb over the dead and dying to reach the stuff and gobble it up.

I love the smell of imidakloprid in the morning. It smells like… victory.

My house. It’s L-shaped; of its six walls, only these two lack windows.

In January, a house near ours caught fire in the middle of the night and was pretty much burned out. A malfunctioning electrical blanket on a couch in the living room was the cause. Nobody got hurt. But it was scary, because Boat Hill is all kedjehus, “chain houses”, separate nearly identical brick buildings with narrow roofed spaces between them, forming contiguous blocks. The house that burned was in the block next to ours, a stone’s throw away.

An identical house seen from the same perspective.

This morning they started to tear the ruin down, using a back-hoe with a huge clawed pincer. A lot of the furnishings were still inside. No attempt was made to separate materials. Me & Jrette saw a blackened dressing gown still hanging on its hook on the bathroom’s remaining wall. We saw the claw grab two wardrobes and crunch them up like an empty milk carton. Char-edged pages from a spy novel were strewn across the street. And I felt a little queasy, because as I said, the houses here are identical. That ruin is what my own house would look like if it caught fire and had to be demolished.

Here’s what the site of the burned house looked like on 8 July after the demolition and clean-up was done.

The bedrock under our neighbourhood contains small amounts of uranium. It’s an unstable chemical element that is subject to radioactive decay. The amounts are small and it wouldn’t be a problem but for the fact that one of the decay products is a gas at room temperature – a radioactive gas, radon. It seeps up through cracks in the rock and disperses into the atmosphere, unless it happens upon an enclosed space, such as a building, where it will accumulate. When radon decays it produces solid particles of radioactive polonium, bismuth and lead. These tend to cling to particles of dust and smoke in the air, and when you breathe these in, the heavy metals lodge in your lungs. There they decay, send out alpha radiation, and increase your risk of lung cancer. (The more smoke you breathe, the higher the radiation dose.)

The Swedish authorities recommend a highest level of radioactivity in indoors air of 200 Becquerels per cubic metre. My wife saw to it that during the winter we had two little particle collectors hanging from the ceiling for four months, with bits of sticky tape inside grabbing a sample of the ambient dust. When they were analysed, it turned out that the radioactivity in our winter air was 270 Bq/m3. This needs to be fixed.

The first thing to rule out was an unfortunate building material, blÃ¥betong, “blue concrete”, which is a type of aerated autoclaved concrete. It was made from limestone and a carbon-rich slate and used up until about 1980, when it was realised that the slate contained enough uranium that the concrete blocks exude considerable amounts of radon. There’s no blue concrete in our house.

Then we called in a radon consultant. He came over with a fast measuring instrument that can give you a radon reading in ten minutes and proceeded to take four measurements.

In the summers we open doors and windows a lot more, which explains why much of our house is currently below the recommended max radioactivity level. But our crawl space is not a healthy place to be, at eight times the max value. The radon collects down there and seeps up into the house. Luckily the problem is easily fixed: we just need to put a small fan in one of the crawl space’s air vents to suck the radon out of the enclosed space and into the atmosphere, and fresh air in. The municipality pays.